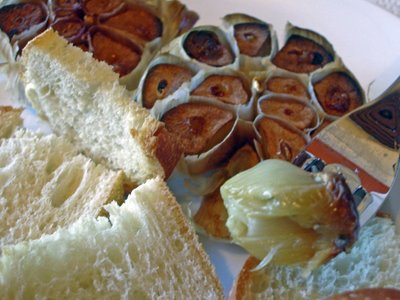 "Without garlic I simply would not care to live." - Louis Diat

I don't do well with raw garlic, I don't like the taste of it, and I don't deal too well with it internally either. But, roasted garlic is a whole different story. It's so amazing the difference in taste between raw or sauteed garilc and roasted garlic. The bite is taken out of the garlic and you are left with a sweet smooth texture. I could eat clove after clove of rasted garlic. The garlic also becomes soft and easily spreadable.

As a note, I was once cooking a meal with garlic and lemon. When I combined the garlic with the lemon juice in the pan it turned a blue color. I didn't know why, and I thought that possibly the garlic or the lemon was bad, so I tossed the whole pan and made something different. I have just found out that this is a totally natural occurance and does not effect the dish. The following is from Whats Cooking America.

Garlic contains sulfur compounds which can react with copper to form copper sulfate, a blue or blue-green compound. The amount of copper needed for this reaction is very small and is frequently found in normal water supplies. Raw garlic contains an enzyme that if not inactivated by heating reacts with sulfur (in the garlic) and copper (from water or utensils) to form blue copper sulfate. The garlic is still safe to eat.

If it is picked before it is fully mature and hasn't been properly dried it can turn and iridescent blue or green color when in the presence of acid.

A reaction between garlic's natural sulfur content and any copper in the water or in the iron, tin or aluminum cooking utensils can sometimes change the color of garlic.

Garlic will also turn green (develop chlorophyll) if exposed to an temperature change or is exposed to sunlight. Some people say it can be stored for 32 days at or above 70 - 80° F to prevent greening

Other reasons to cause garlic to turn blue or green:

Greenish-blue color changes aren't harmful and your garlic is still safe to eat. (unless you see other signs of spoilage). 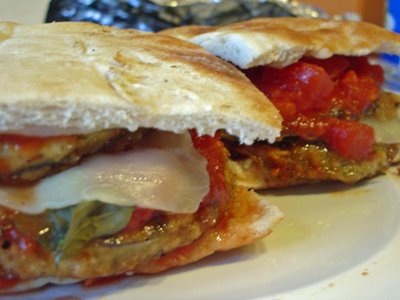 The thing about cooking for two is that you are generally left with a lot of leftovers. After I made the layered eggplant (featured in post below) I was left with an exorbitant amount of crispy eggplant. I decided to make eggplant parm sandwiches on some bread that I got from Cosi. It was all the same ingredients as the night before, but making sandwiches out of it made it seem laid back and casual. We ate them on the deck with a bottle of German Riesling. Simple and great.
Posted by JB at 9:31 AM 2 comments: 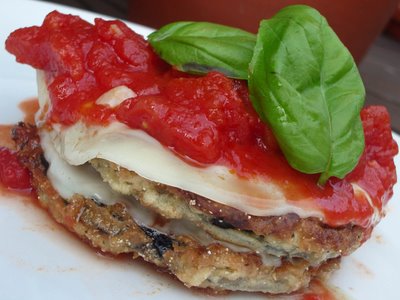 Last week we tried a new restaurant in town called The Beacon Street Tavern. The menu, albeit small was wonderful. I tried their eggplant dish which was fried eggplant, diced tomatoes and mozzarella cheese. It was really great, almost like hearty eggplant lasagna without the pasta. I knew as I was licking my plate and salivating for more that I would be trying this dish at home real soon.

The dish is a little cumbersome only due to the actual process of sweating the eggplant, then battering it twice and pan frying. It takes a few steps, but is well worth it.

I began with the eggplant. I sliced it in rounds, starting from the bottom and working my way to the top. I made the slices relatively thin, slicing this way produced way more rounds than I had anticipated that I would get out of one eggplant. I then "sweated" the eggplant, a process that I learned watching Emeril a few years back. Eggplant contains so much water naturally, that when cooked has a tendency to become soggy. The process of sweating just gets the water out of the eggplant before you cook it, thus eliminating the possibility of soggy eggplant. To do this, you simply sprinkle the eggplant on both sides with salt, and allow to sit for about ten minutes. Do not worry about the amount of salt that you are putting on the eggplant; it will drip off the eggplant with the water that is extracted, and will not stay with the eggplant.

I heated olive oil and a little butter in a deep sauté pan. When hot enough, I layered the eggplant in the hot oil to cook, crisp and brown on one side, this generally took about three to four minutes per side. When the eggplant was cooked I laid them on a paper towel lined try to absorb some of the excess oil.

To make I placed one eggplant round on the plate, then added a slice of provolone cheese, topped with heated diced tomatoes and three basil leaves, I then added another layer of eggplant, cheese, tomatoes and basil to create two layers which seemed sufficient.

If this isn't enough, this whole meal was prepared post Operation: Clean Out The Cabinets and with a kitchen that only slightly resembles a kitchen. See below. No cabinets, also note lovely vineyard inspired wall paper. Hmm, purty. 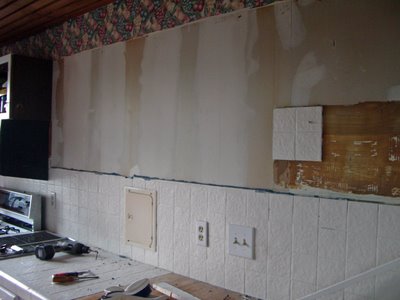 This post is part of ARF/5-A-Day Tuesday over at Sweetnicks helping to promote the use of Antioxidant Rich Foods in daily cooking.
Posted by JB at 8:34 AM 3 comments: 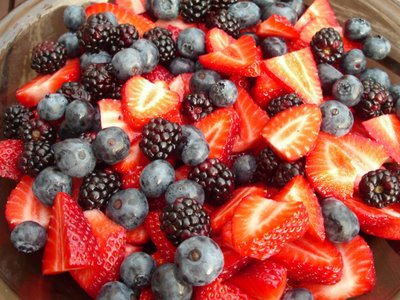 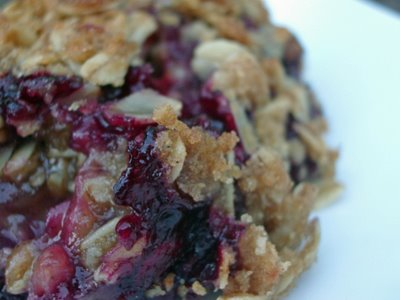 I'd been home from Hawaii for less than 24 hours when Operation:Clean out the cabinets began again. This particular recipe used up a tube of rolled oats that had been stashed in the back of the cabinets. Slowly but surely people, slowly but surely, I will use all the dried goods. However if the bird flu does somehow make it to the east coast of America, CB and I will surely be dead due to the fact that we will have no rations of food to sustain us during the time of crisis. We will have a shiny new kitchen with no food, we will surely die and then be eaten by our cat.

I stopped off at the fruit stand on my way home from work. I love the fruit stand because all the fruit is really cheap, however, I hate the fruit stand because of the asshole who stands there all day screaming the price of the fruit over and over again. He has also glared at me more than once, when I took the time to inspect the fruit before buying it. Once he told me that he had never seen anyone look at fruit so long before buying it, I responded that I once bought a carton of strawberries there only to discover when I got home that they were moldy, so as long as he was going to sell moldy fruit, he was going to have to deal with me checking the cartons before I bought them. I believe that I have also told him to shut the hell up when he screamed in close proximity to my ear once.

I didn't know what I was going to do with the fruit when I got home, but as I was washing all of the fruit, I thought that a nice tart berry crisp would be great for CB when he got home. So I filled a circular pie plate with enough sliced strawberries, whole blueberries and blackberries to cover the bottom then made the crisp topping from the following recipe.

I combined all the ingredients to make the crumble, then layered on top of the fresh berries. Bake at 350 degrees for 35 minutes.

This post is part of ARF/5-A-Day Tuesday over at Sweetnicks helping to promote the use of Antioxidant Rich Foods in daily cooking.

Researchers at the USDA Human Nutrition Center have found that blueberries rank number 1 in antioxidant activity when compared to 40 other fresh fruits and vegetables. Anthycyanin - the pigment that makes blueberries blue - is thought to be responsible for this major health benefit. Blueberries also contain beta-carotene, Vitamin C, Vitamin E, Vitamin A, ellagic acid and phenolics that can also act as antioxidants. Other health benefits one can expect form blueberries are: 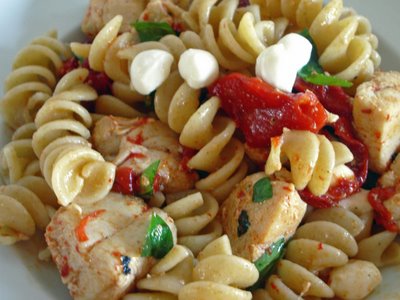 So, I said I would get one food post in before I took off again, and here it is.

We are in Operation: Clean Out the Cabinets. Our new cabinets will be in around the middle of August, so we have to gut the kitchen before the professionals come in and install all our shiny new appliances and wooden cabinets. I have amassed a lot of boxed dry goods since we moved, and now am given the dubious job of trying to use them all up before we gut the kitchen. This particular meal only used two items from the cabinets, the pasta and the roasted red peppers, but hey, you gotta start somewhere.

The best part of this meal for me was snipping the fresh basil from my plant that is growing in a clay pot on the deck. It's so great to be able to grow something and then use it in your meals. This is the only piece of me that aches for the country. I love city living, but there is something to be said for growing your own produce and filling your table with your own bounty created from your own handy work. I also am not naive enough to think that I would actually have the time or the energy to sustain more than a few pots of herbs sitting on the deck, so I will continue to buy everything else from the grocery store.

Apparently CB thinks that the joy of growing herbs has rendered me stupid. Why you ask. Well, because as I was cooking dinner last night he waltzes into the kitchen to ask if I have washed the basil. "Why wouldn't I wash the basil?" I ask. "I don't know I just wanted to make sure that you did."

Ok. Never has he asked me whilst preparing a meal if I have taken the proper precautions with the produce, but now because the produce came from the deck, the veritable fruit of my loins, I would suddenly think it to good to come in contact with the h2o, and whatever bugs have shat all over it are just additional flavah. Hmm. I am so glad I don't have dairy cows. Hey, is this milk pasteurized?" 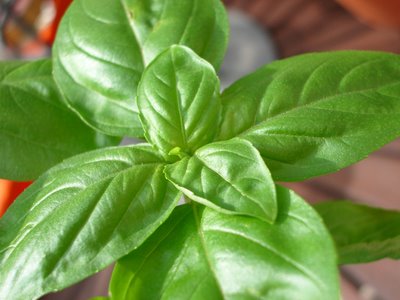 "Did you wash the basil?"