Because I have been doing so much wine tasting, traveling and general imbibing I've created another blog dedicated purely to wine. Its called Wine Snitch and I just posted my first review today. Please check it out.
Posted by JB at 8:41 PM 3 comments:

I may have planted too many cucumbers | Japanese Cucumber Salad 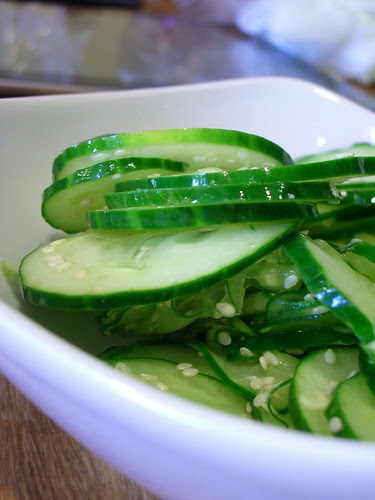 Last year my cucumbers performed miserably. I don't know why, but it was frustrating as I think nothing is as good as a fresh cucumber with a little salt on it in the middle of a hot summer afternoon. This year, I clearly overcompensated for my cucumber failure last year because I literally walk out of the back door and get slapped in the face with cucumbers, which exploding overnight are testing the endurance of their vines, begging to be picked.
Sunday was Hot As Balls and I was not about cook, so I broke out the trustee mandolin slicer and made this quick and refreshing cucumber salad. Super Simple and Refreshing, that's really the best way to describe this salad, which I found on the Eating Well website located here.
Let me know if you make it, and also if you have any favorite cucumber recipes, I'm gonna need them, also, Japanese Eggplant, mine have become almost as big of a nuisance as the cucumbers.
Rating = Good
Posted by JB at 8:39 PM No comments: 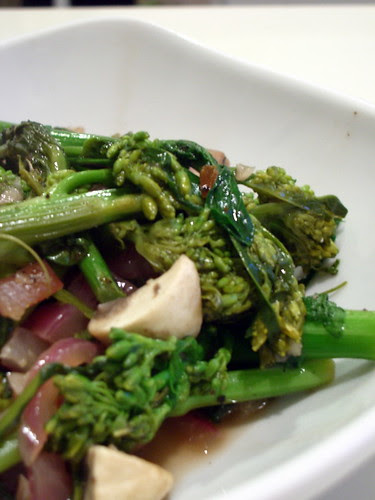 Now that I have three summers of organic gardening under my belt I have discovered a few things that should be filed under "Shit That Is Not Worth Growing On Your Own!" and, Broccoli Rabe is one of them. I love it and its kind of spendy in the market, but you know what - don't plant it jut pay for it. From last years garden adventure, watermelon and broccoli are added to that list.


Over the winter I became mildly addicted to the brocolli rabe with mushrooms and red pepper flakes in the prepared food part of Russo's in Watertown so I decided instead of paying $6 per pound for it in the summer I would grow my own and I would be in Broccoli Rabe heaven all summer. Not so much, I can't seem to get to the rabe before it bolts and flowers, and at that point it's too bitter to eat - the picture above is broccoli that was harvested in my garden right before it bolted, and it was still very bitter.


So - I'll just continue to buy it,  Boo Hiss! And I will rip up the rabe and replace it with Swiss Chard because I cannot get enough of it now.


Also, on a complete side note, if you happen to go out for sushi and end up eating about two pounds of seaweed salad because it's so good and you just can't stop yourself - your bathroom the next morning will indeed smell like Casey Anthony's trunk. Just saying, open a window, give it five or ten minutes. 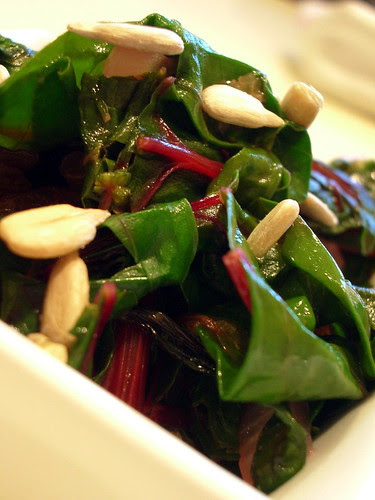 This conversation between Chris and I should give you a little insight into how many times I have cooked Swiss Chard since Chris and I have been together.

Me: I hope you like Swiss Chard because that's what were having for dinner tonight?
Chris: Swiss Chard, Is that a fish?
Me: (blank stare) - (I mean I guess there is a fish called Artic Char, so maybe its not that big of a leap to think Swiss Chard might be a fish.)  - (Yes it is, that was terrible Chris)

So I made Erin's recipe that is in the comments with just a few minor tweaks due to lack of ingredients, I used sunflower seeds instead of almonds, a red onion from the garden instead of shallot, and cider vinegar instead of red wine vinegar, and you know what? It rocked. I ate the whole thing....I can't wait to make the other suggestions that were left in the comments or sent to me, including the rolled stuffed grilled chard and some sort of card augratin that someone told me about.

Seriously, I would have this as a side dish everyday of the week. I didn't plant chard, I've been eating my neighbors while I tend to her garden while she is away. Next year, chard will be front and center in on of my raised beds.

Next challenge....KALE, we've got lots of it, suggestions?

Picked it yesterday. Never made it before. Going to try tonight. Send recipes if you've got em.
Posted by JB at 11:44 AM 4 comments: