What to do when you are assaulted by cucumbers: Refrigerator Pickles 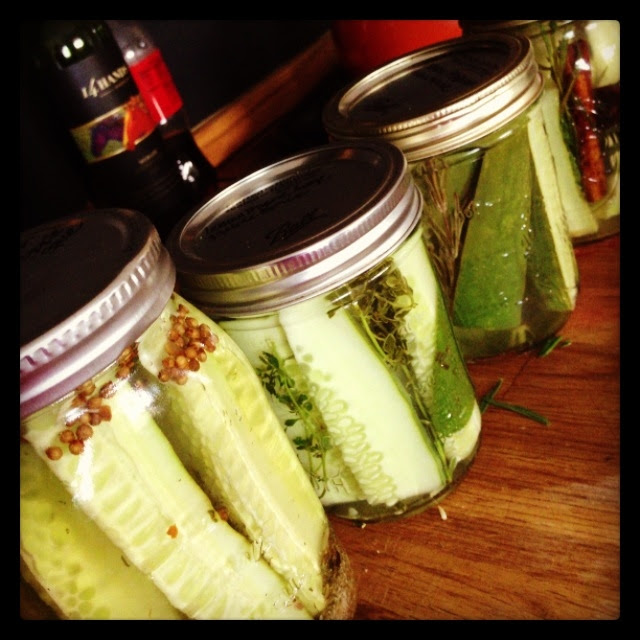 I've already mentioned that I have been a horrible urban farmer this summer. Really, this is the worst I have ever treated the garden - I vow next year to not be such an asshole and take some time with the garden. There is a bigger conversation lurking here about mindfullness and slowing down and enjoying life and not always being on the go - that is something I will have to tackle in the winter, when I'm dreaming of having my garden and smacking my forehead over and over again about the fact that I had a backyard full of herbs that I completely ignored for three months.

I know this scenario will play itself out more than once, most likely all winter.

I filled the jars with quartered cucumbers and then the fillings, poured the hot brine over the cucumber to the top of the jar, sealed then and stuck em in the fridge and basically forgot about them unti a couple weeks ago when I tried Jar #3 and you know what. THEY WERE AWESOME.

I haven't tried the other jars, but I do plan on trying them soon - so stay tuned.

If you have a favorite refrigerator pickle recipe, please share it - cucumber, asparagus, beans, what ya got? 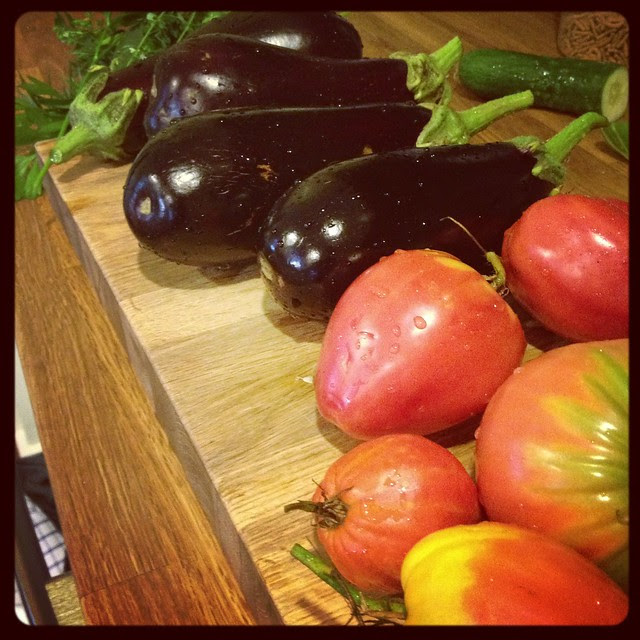 I'm lucky this year. I've been treating this garden worse than if it was a red headed stepchild. Said stepchild must be stubborn as all get out becuase even with the miserable treatment it is turning out vegetables left and right. Tasty gorgeous vegetables. Maybe even too many vegetables considering I got this from Chris last night.

"Do you know I'm eating on average a cucumber a day?"

I hadn't noticed, probably due to the fact that he's been getting the same treatment as the garden as of late.

Last night was the first night in I have no fucking idea how long that I was actually home, not exhausted and had the urge to get in the garden and make something for dinner. Why haven't I been doing this all summer? The answer to that probably lies somewhere between too much work and way too much wine. Way too much wine. And then some more wine.

So last night I grabed 5 or 6 of the heirloom tomatoes, a couple of the eggplants, a few zucchini and an assortment of herbs and just had at it with them. I didn't follow a recipe, I just winged it, which I am enjoying more and more. Here's what happened.

I let it get all bubbly and aromatic then added a little grated Parm cheese and then served it over tiny little pasta balls.

It was good. Very good. I know this because at the first bite Chris pushed his bowl over to my side of the table and said. "This is good, try it."

And then, at the conclusion of his third bowl he said "Fuck, that shits good."