They really do say that down there. Anyway, I'm back from New Orleans. The trip was great, the food was great, and the people were great. Traveling back blew donkey balls. Can you say delays...all flippin day. Ugh!

I am so glad to be home. I hate to sound cliché, but it is so fucking hot down there. I guess I shouldn't complain considering it rained all day everyday here while I was gone, and I basked in the sun there with only a minor shower on Saturday night. New Orleans is such a great place, but also such a tragic place. I won't ever get all my sentiments about that place verbalized correctly, but I will try.

When I got there on Thursday, the conference had not yet begun, and it was quite evident that the tourist industry is almost non existent, which is really a shame, because the French Quarter was basically untouched by Katrina, and is operating at full capacity at this time, except for a few stores that suffered water damage due to roof leaks and wind damage. Most people don't realize that the French Quarter was pretty much spared during the storm, and was back up and running soon after the storm left. The sad part about this is that Canal Street and the Riverwalk suffered damage, not by the winds of Katrina, but by the greed and disrespect of the looters. Almost all of the Riverwalk is still closed, and the major stores on Canal that suffered the worst looting are still being rebuilt. It was in these places that the devastation of lawless humans far outweighed the devastation of mother nature.

What was striking about my trip to New Orleans, were the amount of thanks that I received from local businesses. With ever meal I bought or tour I booked I was thanked for coming, for not being afraid, for helping to restore the City. I heard it over and over ever day "thank you for being here" it truly was heartbreaking to realize how alone this City must have been for the past year. Most of its residences have been displaced to neighboring states, the streets once filled with tourists clamoring to hear music lay bare. Musicians play to empty bars and cafes. It truly was a site for sore eyes. It's too bad that the actions of a few, made an impression on the masses.

Ok, I missed my blog, I missed my kitchen, I missed my cat, I missed my husband. I missed the security of being home. We'll I'm going to have to suck it up, because I leave for Hawaii in a week. No, not for pleasure, but for work. My poor blog lay bare as I traipse around the globe. I'm going to try to get a few recipe posts in while I am home this week, but being the holiday and all, I'm not sure what time I will have, but I promise, I will try.

Below is a sprinkling of the 200 pictures I took while I was in New Orleans. While I was there I took a City tour which traveled to the 17th Street Canal that gave way during the storm, flooding all of the houses almost up to there roofs. In the pictures you can see the water lines on the houses, where the water settled and stayed for 3 weeks before receding.

I also went on a swamp tour, where I saw my very first aligator. I also went on a literary walking tour, which I have to say, for me, was a bit of a snore. I like to read, and I also like to write, but I just found this completely boring once I was in the second hour of the tour.

I ended my tours with a Ghost Tour, which had it not been for the crazy geriatric tour guide would have been a waste, but Mary made it all worth it. 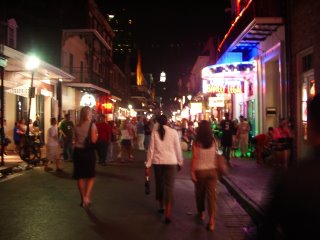 View of Bourbon Street at night. 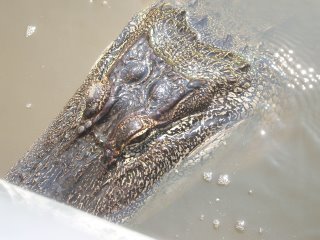 Aligator I saw while on the Honey Island Swamp Tour. 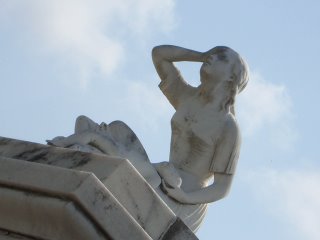 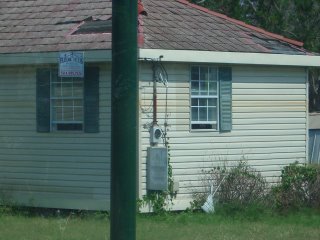 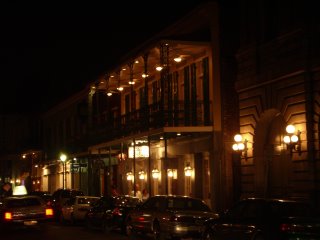 Au Revoir...I'm off to New Orleans 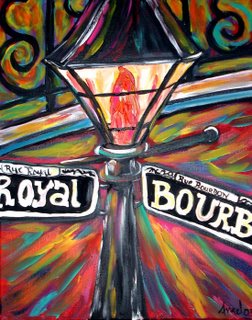 I'm off to New Orleans. It's for work, but the beauty of my job is that part of it is "entertaining" past, potential and current clients. I'll be on a virtual culinary cruise through the French Quarter this week. I'll be dining at Muriel's, GW Fins, Bayona, NOLA and others along the way.

I'll have no access to the blog while I'm away, but be prepared for a exhaustive recap when I get back.

Someone pass me a milk punch. 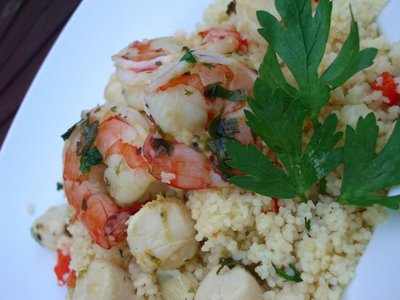 So it's either raining like the dickens, or it sweltering hot here in the northeast. Yesterday was the latter. It was air conditioner cranked on high, cold shower taking, iced tea sipping, kind of weather. The kind of weather to me that screams seafood. I love seafood all year round, but there's something about seafood on a hot summer (almost) night that just feels right.

For this dish I decided to again incorporate an Antioxidant Rich Food in the recipe. Antioxidants protect the body from harmful, excess free radicals. Free radicals are the reason why people develop chronic disease, especially older people. Free radicals are highly unstable chemical substances that lack one electron. In their attempt to get their full complement of electrons, these free radicals react with other molecules around them (like those found in cell membranes) and in the process cause these otherwise healthy molecules to lose an electron, causing them as well to become unstable. This could result in massive degeneration of cells, leading to the development of chronic disorders such as Alzheimer’s disease, heart disease and cancer to name a few. Through consumption of antioxidant food source, you can help your body provide for itself the tools necessary to neutralize harmful free radicals.

Why the artichoke? USDA has ranked cooked artichokes number 10 from their list of top 20 antioxidant-rich foods. The study showed that one cup (hearts) of artichoke contains up to 7904 antioxidant capacity per serving size.

Recipe:
I marinated the shrimp and scallops in a mixture of olive oil, fresh lime zest, lime juice, orange juice (fresh), parsley, salt and pepper. I marinated them for about 20 minutes, then sautéed them in the marinade on the stove top.

For the couscous, I cooked to the directions on the box, but added a jar of chopped artichoke hearts, 1/2 diced red pepper and 1/4 c chopped fresh parsley.

When the couscous was done, I served it topped with the shrimp and scallop sauté. YUM!

This post is part of ARF/5-A-Day Tuesday over at Sweetnicks helping to promote the use of Antioxidant Rich Foods in daily cooking
Posted by JB at 8:14 AM No comments: 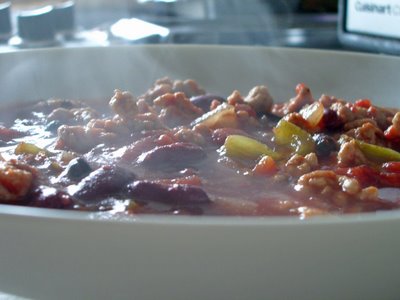 I'll say it again, as I've said it in nearly every post this spring; the weather here just blows right now. I've never seen such a wet and windy spring in my life. It's terrible. It seems a portion of everyday is just wet and raw and terrible.

Saturday was no exception, it was windy and wet and all around blah! After spending the afternoon in the movie theatre watching X-Men 3 (which was worth the admission) CB asked for chili for dinner. Which surprised me, considering it is June, but since it feels more like March it seemed like an appropriate request.

In a large pot combine the cans of tomato, and beans, add seasoning to your liking. In a sauté pan, sauté the onion, celery, pepper and ground chicken with a little olive oil. When the chicken and vegetables are done, add to the tomato base, and let simmer for 30 minutes.

This post is part of ARF/5-A-Day Tuesday over at Sweetnicks helping to promote the use of Antioxidant Rich Foods in daily cooking
Posted by JB at 8:17 AM No comments: 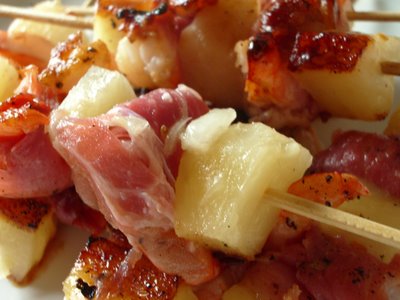 This recipe was so good. I altered it from a recipe that Emeril had made one night. I first marinated the shrimp and pineapple in a mixture of lemon juice, lime juice, fresh garlic, ginger, and olive oil. I marinated it for about half an hour. While this was marinating I soaked the skewers in water so that they would not burn in the grill pan. After marinating I wrapped the shrimp with proscuitto and skewered alternating between shrimp and pineapple.

This spring sucks ass, it rains almost everyday, I feel like I'm living in Seattle. Usually New England jumps straight from the cold of winter into the suffocating heat of summer with no transition. Not this year, we seem to be stuck in a pattern of rain, rain, and then more friggin rain. Because of the weather I could not grill these outside on the grill, so I grilled them inside on a grill pan. While these were grilling on the pan, I brushed them with more marinade, which really helped them brown up. The shrimp needs a little longer to cook than usual because the insulation from the proscuitto protects it from the grill, so it needs extra time for the heat to permeate the ham and cook the shrimp. 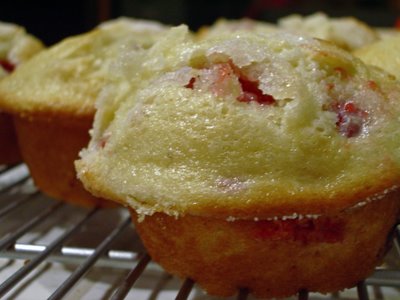 There has been a whole lotta talk in the media lately about how muffins are the secret diet killer. Apparently there are some people who are under the assumption that muffins are a healthy alternative to other breakfast foods. Are these people f'in stupid? Muffins are cake in disguise. Muffins are little tasty individual size cakes that you eat in the morning. Look at the ingredients for cake, and then look at the ingredients for muffins, practically the same people. Yes, we have an obesity epidemic in this country, children are being diagnosed with adult onset diabetes left and right, but let's not blame the muffin, let's blame stupidity and bad parenting, let's blame the fact that this country has no idea what portion control is.

Let's not blame the muffin. 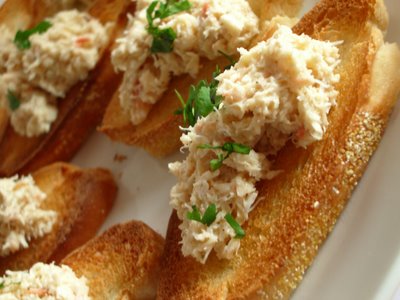 As I mentioned a few months ago, we just moved to our new condo in the City. The only bad thing about packing up and selling our old condo, was that we really loved our next door neighbor. They are a great couple. In December of 2004 they had a beautiful baby girl, and it has been such a joy watching her transform from a veritable sack of flour just lying on the floor, to a walking, talking, adorable little toddler. We have watched her grow, amazed at the leaps and bounds that children take in their first few years of life. We have missed seeing them everyday and hearing the little girl squeal with joy from behind their closed doors.

On Sunday the three of them came over to our new place. We hadn't seen them in almost two months. It was such a joy to see them again, and know that a friendship that had grown because of proximity wasn't changed by distance.

The recipe below is one of the appetizers that I made yesterday. This is literally the simplest recipe and we all devoured it.

Preheat the oven to 350 degrees F.
Place the cut bread slices on a baking sheet, brush with olive oil and place the sheet in the top half of the oven for 3 minutes, until the bread is lightly toasted. Remove from the oven and set aside.

Drain the crabmeat well and place it in a mixing bowl. Add the mayonnaise, cumin, hot sauce, lime juice, chives and salt and mix well. Mound the crab mix onto the bread rounds by the teaspoonful and garnish with a piece of chive.
Posted by JB at 8:26 AM 1 comment: